COVID-19 UPDATE: What We Are Doing to Protect Our Clients 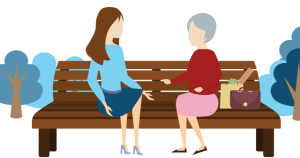 Yes. The answer is unequivocally yes. The conversation might be uncomfortable and hard but necessary. Adult children don’t need to know everything, but they should be informed of some basics of their parents’ estate plan. A surprising number of Americans do not have a full estate plan in place. Only about 18% have an estate plan that contains at least a Will, Advance Health Care Directive and Power of Attorney. Most children believe it’s the responsibility of the parents to initiate a conversation about succession planning however, most parents don’t. A recent article in the Wall Street Journal highlights the challenges and offers suggestions for this difficult topic.

First and foremost it’s important to bring up the subject, inquire gently and respectfully and, if necessary, enlist a third party for help.

END_OF_DOCUMENT_TOKEN_TO_BE_REPLACED

Often in a marriage, one spouse is primarily responsible for handling and managing the finances and bill paying. However, that arrangement leaves the other spouse in the dark. When the hands-off spouse has to take over the financial responsibilities because of a death or disability it can be a great challenge. Anne Tergesen in her article “Estate Planning for the Uninitiated” in the Wall Street Journal provides some excellent tips to help both spouses stay informed. One of the best tips is to hire an estate planning attorney to make sure all documents are up to date and make sure that both spouses understand what each documents says and does.

Making charitable bequests in Wills or Trusts is a common practice. However, many individuals merely name a charity and do not specify for what purpose such a gift should be earmarked. Recently, an extremely generous, if not equally frugal, librarian in New Hampshire left his entire $4 million estate to the University of New Hampshire. He stated that $100,000 must be used for the library, but did not specify how the rest of the funds must be used. The University has decided to use $2.5 million to expand a career center for students and alumni. However, the University has also decided to use $1 million to purchase a video scoreboard for the school’s football team. This decision is causing an uproar among students and community members who believe that the spirit of the gift is not being followed. The contention is that the donor would be “turning in his grave” if he knew that his money was being used to purchase a video scoreboard.

To prevent similar issues for your charitable gifts, you should leave specific instructions and directions as to how your gift must be used. If you do not, the charity has the discretion to use the funds in any way it chooses. Sample language includes, “To Charity X to be used for ___________” or “$$$$ to Charity X to establish a ______________ in my name.”

A new development in probate law involves the use of transfer on death deeds for real property located in California. Other states have authorized the use of such deeds but it has only been available in California since January 1, 2016. Essentially, the deed works like any other transfer on death designation. When you die, your designated beneficiary inherits your house. The process sounds great in theory. Such a deed would completely circumvent a probate process. However, the use of such deeds should be done with extreme care and caution.

END_OF_DOCUMENT_TOKEN_TO_BE_REPLACED

It is common that a married couple in their late sixties creates an estate plan which names their child or children as Trustees and/or Agents. This is a great first step in setting up a plan that can help when the parents are no longer able to care for themselves or their finances. However, the second step is the talk openly with your children regarding your assets. Far too often children are faced with the challenge of taking over their parents’ finances only to find out they have no idea where to start. What does Mom and Dad own? Where are their accounts?

The Wall Street Journal just published an article discussing the importance of sharing financial information with your loved ones. The untangling of financial information by children for their parents is a common problem. The problem can be mitigated significantly if you write out a list of your assets or otherwise have a roadmap so that your successors and agents can get access to accounts when necessary.

A surprising number of families learn the painful lesson that divorce doesn’t fully resolve beneficial ownership issues with certain retirement accounts. Any plans governed under the Employee Retirement Income Security Act of 1974 (ERISA) must follow specific rules and provisions, which will override the provisions in a marital settlement agreement. The only exception to this rule is if the couple has a Qualified Domestic Relations Order (QDRO) as part of the divorce settlement. The effect of all this is that if you designate your spouse as a beneficiary under an ERISA plan, and neglect to change that beneficiary designation after divorce, the now ex-spouse will receive the asset at your death.

Many states, California included, have enacted laws that prevent an ex-spouse from inheriting from the estate of a prior spouse. California Probate Code § 5600 states that if an individual designates a spouse as a beneficiary on an account, that spouse will not inherit the asset if the spouse is divorced at the time the individual dies. This makes sense. In general, most people wouldn’t want to leave any assets to an ex-spouse at their death. This code section was enacted to cure the simple mistake of not updating beneficiary designations after divorce.

Unfortunately, accounts governed by ERISA don’t follow state laws and thus the protection provided in the Probate Code doesn’t apply. The US Supreme Court has consistently ruled that beneficiaries listed on ERISA plans will receive the asset even if the beneficiary is an ex-spouse. This is true even if the couple has been divorced for decades. The only exception is a QDRO. Many do-it-yourself divorces don’t include a QDRO because the parties may not know what it is or may not know that it is required for their assets. According to the IRS, a QDRO must contain specific information regarding the retirement plan including the nomination of an alternate beneficiary, with his or her last known mailing address, and the amount or percentage to be paid to the alternate beneficiary. A simple marital settlement agreement will not be deemed a QDRO absent the required language.

END_OF_DOCUMENT_TOKEN_TO_BE_REPLACED

Bankruptcy can disrupt your estate plan. We previously discussed here the problem bankruptcy creates if you have assets in joint tenancy with a bankruptcy debtor. However, bankruptcy can also effect your estate plan for your beneficiaries if certain precautions are not followed. A recent case, Frealy v. Reynolds, highlights this problem. A Trust beneficiary was part of bankruptcy and the bankruptcy Trustee attempted to get all of the beneficiary’s interest in a Trust to pay off creditors. The Ninth Circuit ruled that a bankruptcy trustee’s recovery was limited to 25% pursuant to the Probate Code. However, 25% is still a large amount.

Imagine the situation of leaving your entire trust estate to two children outright and free of trust. You think this is fair and equitable. However, if one of them is in a bankruptcy, his share will be greatly reduced after the bankruptcy court takes 25% to pay off your child’s creditors. Your intention of providing equally for your children has now been disrupted.

A more effective approach would leave the bankrupt child’s assets to a spendthrift Trust or keep the assets retained in Trust with spendthrift provisions. The Trustee could have the discretion to distribute to the child but not if the money will be used to pay creditors. The Trustee would not be obligated to make payments and therefore the beneficiary is not considered the owner of the assets. Since the beneficiary is not the owner the bankruptcy court cannot compel the distributions which would go to the creditors. Instead, the Trustee may wait until the bankruptcy proceedings are over to make any distributions to the beneficiary.

END_OF_DOCUMENT_TOKEN_TO_BE_REPLACED

Some celebrity estates are embroiled in the media and legal battles while others remain private and relatively peaceful. Here are some lessons learned from the estates of the rich and famous.

Recently deceased Paul Walker set up a trust for the benefit of his minor daughter. However, he failed to fund it so it will eventually be funded under the terms of his pour-over will when the probate is closed. His will and his reportedly $25,000,000 in assets is now public record through the probate court proceedings in Santa Barbara, California.

END_OF_DOCUMENT_TOKEN_TO_BE_REPLACED

As estate planning lawyers in Palm Springs, we frequently get asked by clients to prepare deeds transferring property to children. As we have previously discussed, using deeds as an estate plan is very risky and not recommended. A recent bankruptcy ruling in Oklahoma highlights this problem:

Whether for carpentry or estate planning, it is usually a good idea to use the right tool for

the job. Unfortunately, when it comes to estate planning and asset transfer, people are

END_OF_DOCUMENT_TOKEN_TO_BE_REPLACED

While the end of DOMA is wonderful, it doesn’t solve all problems for same-sex couples. The lifting of DOMA restrictions only applies to married same-sex couples. Unmarried same-sex, and also opposite-sex, couples have unique issues and concerns when creating an estate plan. Various techniques and tax saving vehicles are unavailable to unmarried partners.

Joint trusts are unadvisable for unmarried partners since the couple does not enjoy marital exemptions in gifting. Unmarried partners may choose instead to have separate trusts with identical provisions. For example, when one partner dies the other inherits everything.